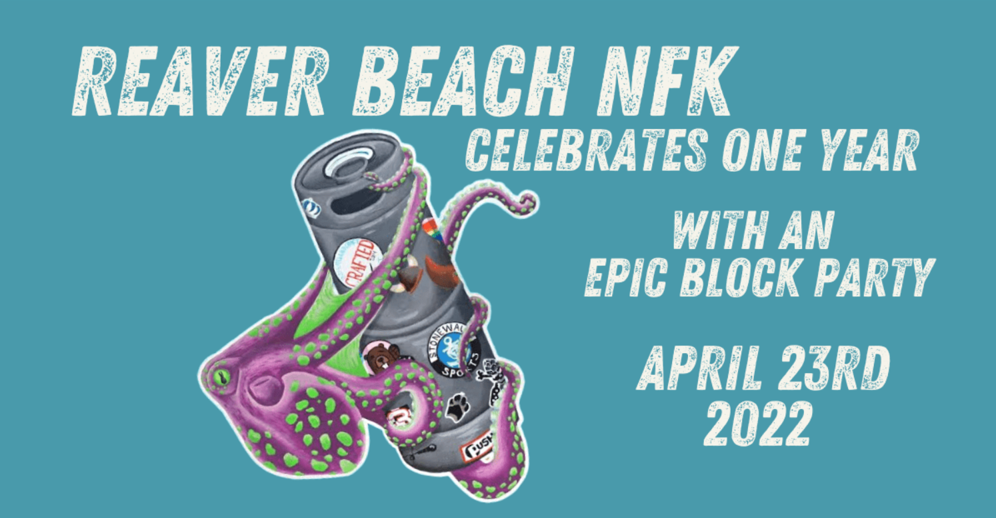 Almost three years back now, we first got the announcement of a Reaver Beach taproom coming to the old Post Office on Colley Avenue. Some folks were indeed excited, while others held a healthy skepticism. Before, we’d heard the rumors of brewery expansions, like Stone Brewing and Champion, which fizzled out. We’ve even lost breweries that couldn’t quite make it (RIP Coelacanth, Bearded Bird). Then before Reaver Beach NFK even got a chance to open, a global pandemic dropped in for a visit. It was perfectly reasonable that many people held back their excitement, waiting for the project to come to fruition.

This time last year, Reaver Beach finally opened its Norfolk taproom to the public. The first vaccines were still rolling out, and there was plenty of hesitation about jumping back into the full-fledged restaurant and brewery operations. Capacity was still limited, and mask rules were still firmly in place. Reaver Beach didn’t quite get the grand opening party it deserved. Over the following months, plenty of locals stopped into the newly transformed Post Office to find a well-designed space, super friendly staff, and tantalizingly tasty beers.

As the summer heated up, Reaver Beach started to host more and bigger events at its new location. Live musicians, food trucks, community groups, craft shows, theater shows, sports leagues, trivia shows, holiday celebrations, and more have come to pack the Reaver Beach NFK calendar. Now thousands of beer lovers have had a chance to experience Reaver Beach. The location became a weekly hangout for plenty, and many people keep close tabs on their upcoming event schedule. A week rarely goes by without the parking lot and taproom brimming with happy people.

Reaver Beach NFK has become a pillar of the community. It’s brought a venue for a wide variety of community organizations to come together and a space where the full diversity of our city feels welcome, kicking back to enjoy a beer with friends. That’s no small feat, and it deserves a celebration.

This weekend Reaver Beach is throwing a banger of an anniversary party to mark an incredible first year. Friday, Saturday, and Sunday have excellent anniversary lineups on the books.

With all the excitement and buzz around the Saturday block party, the Reaver crew couldn’t resist getting the party started early. You could say that Friday will be a bit of a “bock party.” Reaver is rolling out two new beers to please your palettes: Oh Mai! – a Maibock and Goat Pilates – a Doppelbock. While you’re working on your Bock to the Future jokes, Dan Pellegrino will take the stage and showcase his superb guitar skills. Pellegrino’s folksy acoustic jams will help you melt away the worries of the workweek as you try out Reaver’s new bocks. Senses Vegan Comfort Food will be serving their sought-after southern classics. This small mom-and-daughter-run business has been making fervent fans out of Norfolk’s plant-based community. Friday’s pre-party is the perfect wind-down of the work mindset and warm-up for the weekend ahead.

Saturday is the main event, with a massive parking lot party in the works. The Reaver Beach team is rolling out food trucks, live music, local vendors, improv shows, a group run, and lots of games and activities.

First up, Norfolk Run Club is kicking off the day with a special anniversary run at 11:30 am. For the fit and the first-timers, this big group of cardio-lovers is a fantastic way to have fun while you run. Like when your mom used to make you eat your veggies first, get your workout out of the way early before a full festival day.

Now, the big headliners: food and music. Hangry’s and Miss Kim’s Kitchen will be serving up their finest chow. Hangry’s lineup of “Virginia-Mex” fare like Carne Asada Tots and Mexican Philly Cheesesteaks are super-comforting. Miss Kim’s Korean cuisine, including Bibimbap, Bulgogi, and Korean Corndogs, oozes the love of family and culture, making every order feel like a home-cooked meal.

The schedule is start-studded with Norfolk’s favorite performers on the musical front. Nate & Jarvis (of Paper Aliens), Fox and the Bear, and Nate Sacks will be taking the stage. The head-bobbing, foot-stomping, and hand-clapping will be unavoidable. A combination of original tunes and covers of crowd-pleasing classics is what the doctor ordered for a Saturday celebration.

Not to be overshadowed by the incredible music, Push Comedy’s team of improv comics known as the Reaver Beavers will be taking the stage in the afternoon. If you’re not familiar with Push Comedy shows, rest assured that they are consistently delightful. When you can tell the performers are loving every minute of being on stage, you’ll laugh so hard that your cheeks will be sore the following day.

Alongside the performances, a collection of excellent Saturday activities will be in action. The most notable is Killin’ Pine Ax Throwing, with their mobile ax-throwing trailer onsite. Attempting to stick an ax into the center of a target better than your buddies is the height of Saturday fun. Cornhole, Bucket Ball, and Giant Jenga fill out the roster of yard game shenanigans. Silly wagers, competitive trash talk, and rule-book-lawyering will surely abound.

As if this colossal anniversary wasn’t already going to be slam-packed, Reaver Beach is bringing some super rad pop-up vendors to the event. Of course, the Norfolk Currents booth will be onsite with our favorite local merch. Neptune City Beads, Pawsnickety Pets, Ulti-Mutt Dog Toys, VB CBD, Stonewall Sports, Push Comedy Theater, and the Reaver Beavers improv team will all have booths to stop by. Maybe you’ll leave with a new tee, a dog collar, new friends on a sports team, or a new comedic hobby. Serious opportunities await you.

Look, Saturday is going to be pretty intense. Take the day off to post up and recover with your Reaver crew. Reaver Beach breaks out their specialty brunch beer cocktails to wet your whistles. Deutscher Imbiss will be onsite slinging their signature German street food all day. Sehr Lecker Suntag!

Reaver Beach is putting on a well-earned one-year celebration this weekend, doing what they do best: bringing in the community for a big ol’ party. If you’ve had a chance to enjoy Reaver Beach this year, come out this weekend and show the team how much you appreciate their open doors, big smiles, and contributions to our community.