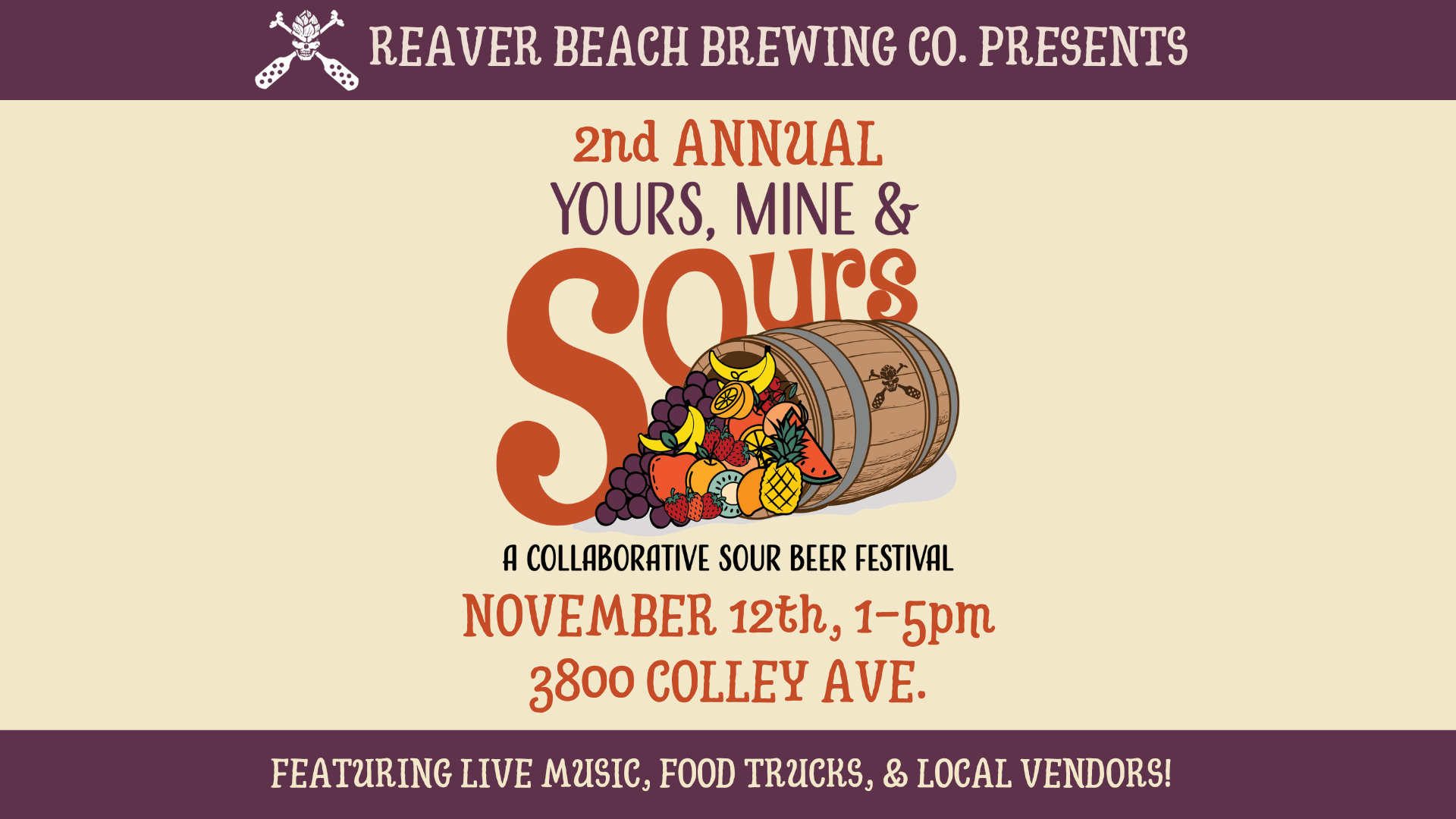 Pucker up, punks! The tastebud-tingling party for sour beers is back in Norfolk this Saturday. For the second year, Reaver Beach is hosting a collaborative beer festival celebrating sour beers. It’s called, Yours, Mine, and Sours, happening 1 pm – 5 pm on Colley Avenue.

The acid aficionados and all beer appreciators alike are gathering to enjoy the specialty of sour beers. The sour beer craze that washed over the brewery scene is cementing its place in the culture, and it is definitely here to stay. With flavors ranging from fruity to funky, there is lots of palette-pleasing potential in the world of sours. If you’re new to the sour world, or even the craft beer world, sour beers can be some of the most approachable on the menu. Yet, sour beers can also be some of the most complex and niche beers as well. The sour fermentation process has so many possibilities that it opens the doors for brewers to be very creative.

Reaver Beach was the first brewery in Virginia to utilize a cool ship for wild inoculation and Reaver’s “Tidal” sour (available at the festival) is a 100 percent spontaneously fermented beer. All of Reaver Beach’s oak aged sours contain a local wild yeast culture, which makes them particular to our environment. The unique mix of microflora in each wild sour can only come through collecting it from the air. At any given time, you can catch 2-4 of these wild yeast sours on the Reaver Beach draft menu.

The culinary corridor of North Colley Ave is the perfect place for this massive exploration of flavors, with dozens of nearby restaurants and craft beer establishments. That means Reaver Beach’s festival lot will be teeming with foodies at Yours, Mine, and Sours. Folks from across the region are coming to check out sour samplings from over a dozen breweries. There will be exclusive sour beer collabs, barrel-aged collabs from 2021, breweries visiting from afar, and a healthy serving of guest taps.

Alongside a sour beer smorgasbord, there will be food, music, and vendors to enjoy. Nate & Jarvis of Paper Aliens band and Nate Sacks, one of the region’s most talented guitar players, will be keeping the energy high all day long. Meanwhile, hunger pangs will be cured with the kitchen wizardry of food trucks Big Belly and Flippin’ Hangry. The vendor market include Burnin’ Brews, The Sweet Tea Woodshop, Cornix Coffee Co, Wuby’s Wings, Elle’s Pins, Fairy Hair by Chelsea, Sugar Bird Jewels, Not to Nana Bakery,Ashley Doss Art, and Pit Posh Canine Designs.

The sour beers featured at this Saturday’s event are remarkable in their own right, but the lineup of food, beer, music, and shopping makes this a serious crowd-pleaser.

Get your tasting ticket and the exclusive festival glass here.

Original article from Norfolk Currents can be found here: https://nfkva.com/top-of-the-sour-reaver-beachs-collaborative-sour-beer-fest-returns/